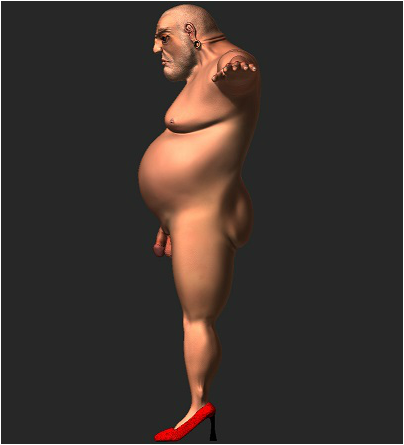 It took a while but Frankie Torres got used to people looking at his breasts, those pointy little teenage breasts that jutted out of his shirt, especially when the sun beat hard on the pavement and the sweat matted down the shirt around those two obvious female glands. It did not help that Frankie was a six foot two male born and reared on that same street of the old city that was his home, friends and strangers alike would stare and if Frankie was in a mood he would stare them down or ask the bartender for another round for all those at the bar. His treat.

He’d got a settlement from the lab in Carolina where he worked. Frankie believed he got off easy. His neighbor and coworker, Carmen, grew a beard and died. So although Frankie went through a few frightful years of unemployment, even more frightful visits to the doctor, and the unnerving experience of seeing his body change from a muscled frame and mustachioed face to a bloated baby faced tropical version of Wayne Newton, the money he received was more than enough to set him up for whatever life he had left. People got used to seeing him around and since Frankie would pay for the drinks they thought it only wise and Christian to ignore his breasts. That is until a TV comedy character caught the public’s imagination.

Sunshine Logroño is an island comic writer, some say a comic genius, who has an eye for street characters that he would transform into roles he would play on television. He had become famous through a character he created meshing an island social scene commentator named Iván Frontera with an iconic fashion and modeling denizen named Grace Fontecha and created such a public uproar on the island that his weekly Iván Fontecha show became a must see. Iván Frontera felt ridiculed and wrongly fought back, which just upped the ratings for the show. In effect, Iván Frontera ceased to exist, everyone believed he was in fact Iván Fontecha. But then tragedy truck and the real Iván was brutally murdered. Logroño was forced to drop the Fontecha character. But Logroño went on inventing roles for his new comedy variety show. One of them was an auto body repairman who went by the name of Tito T, who obviously had women breasts that he was completely oblivious to. That was the joke.

When Frankie first heard the name he thought it was meant for someone else. Everyone knew him as Frankie, Frankie Torres, born and raised on Sol Street in whose bars he passed most of every afternoon and night. But Logroño’s weekly show was seen in every home and bar on the island. It was only a matter of time that Frankie looked at what was on the screen, saw the man with the tits and looked around the bar as the place roared in laughter. He became Tito T. Nothing he could do about it. There is no hiding in a small island, there was no place that he could go without hearing the name unless he took a leap into the ocean or took a plane straight out of there. In his late forties by then, Frankie Torres had never ventured outside the island and his sense of geography was as soft as his breasts. He only knew the streets of the old city and a few roads leading out to neighboring towns. People talked to him about Brooklyn, the Bronx, Hartford, Connecticut, but you could have been talking to him about Rome, Tokyo or an obscure hamlet in the Himalayas. So he tried to find out who this Logroño guy was and found out that he was from Barrio Obrero. He had some family there and tried to reach out to him, explain his predicament but either Logroño never got the messages or felt that he did not have to compromise his artistic integrity just because somebody got a bug up his ass. He knew that once the street pegged you with a pet name there was nothing you could do, you had to learn to live with it.

The Tito T character died down in time, giving way to other more catchy roles. But that was of no use to Frankie who felt that he was now officially Tito T to his grave.

Frankie first began timidly applying lipstick, then eyeshadow. He would then walk into the bar, order his vodka and cranberry juice. A silence fell through the regulars at the bar. People kept their distance. He then upped the ante to a wig, then a halter, and by a year’s end was high-heeling it through the ancient cobblestone streets. He had become Tita T, a whole new character of his own creation.

Frankie a/k/a Tita T was reaching sixty, and was already part of the rarefied landscape of the local corner bars when Joe Burgos saw him for the first time. Joe was by then a forgotten bard, retired public servant and itinerant bar fly who had heard the stories although he wasn’t really known as an ardent TV fan. His now deceased friend and fellow poet, Raúl Bartolomei, had even made mention of the character in one of his famous epic poems to the old city. Maybe Joe looked too keenly, or maybe Tita T was not really in the mood for unsolicited stares that night. When he saw that six foot two woman from hell approach, Joe riveted his head down to his drink and waited for the sky to fall.

You know who I am?
Not really, I’m just here with my…
Then why are you staring?

After thirty years of drinking alone in little corner bars, Joe had felt his share of crippling body blows and beer bottles on his head to know that he had to pick his words with  the care he’d take with an iambic pentameter.

Tita was taken aback, not expecting that precise word. She stared into Joe’s cringing smile and sweaty eyes and saw a fellow traveler. Tita invited Joe to a drink. Joe did not feel he could refuse and just resigned himself to what the locals called a long night. But after hearing Tita’s story which was really Tito T’s story, that was originally the story of Frankie Torres, he recognized the parallels and also felt he found a kindred spirit trying to beat the odds in a violent and unforgiving milieu. They became drinking buddies.

They became Tita and the Professor. A duo along the lines of Lowell and Hardy, Jerry Lewis and Dean Martin, the Lone Ranger and Tonto, or as Joe would say to himself, Vladimir and Estragon, that pinnacle of the absurdist pair. Joe felt the creative juices flowing down the once dry, mudcracked gullies of his soul. Tita felt the long laid to rest stirring of again belonging to the human race awakened.

It wasn’t what they said to each other but the fact that each believed the other listened.

When Tita died there was no money for a funeral with all the trimmings, just enough was scraped from the jars at the local bars to have her cremated. A few bar mates told their favorite jokes about either Tito T or Tita at the wake held at the I’m Here Forever Bar on San Sebastian Street. Nobody there knew Frankie Torres to tell of his life and accomplishments and rumors that Sunshine Logroño came to the wake were proved to be false. Only a few die-hard Tito T fans caught the note in the daily newspaper that gave a brief account of the life and times of Tito T and Tita and even fewer remembered the ill-fated end of Iván Frontera although they did recall the Fontecha character. Joe knew this was the fate not only of the Titas of this island but also the forgotten bards of the enchanted archipelago that he called home.
​
Joe knew that this was a cruel island he was born in much before his In Remembrance of Frankie Torres was lambasted by the critical reviews as the last dregs in the kegs of an ill-begotten bard better left unread, because by this time Joe was writing for posterity that, as the local saying goes, is another twenty dollars. That was the joke.